Yesterday, the Egyptian president invited a few people with highly questionable intellectual abilities to attend one of his famous 'national dialogue' meetings about the highly sensitive issue of the Ethiopian dam. This warranted a quickly written, angry rant on my part. Although the issue is one pertaining to international law, global politics and Egypt's water and energy supplies, the attendees included people who lack any expertise in the aforementioned areas, among whom religious preachers and clergy members. For of course, as it has become the norm in Egyptian politics, one must always include a sheikh and a priest in every so-called national dialogue lest on think that Egypt has some sort of sectarian issue. After all, no matter how many churches are burnt down, no matter how many villagers are killed or displaced in sectarian fights, the image of the priest hugging the sheikh, their beards gracefully touching, is what makes everything ok in the end. Even better is when members of the three Christian denominations are invited, the more the merrier, national unity has never been truer. 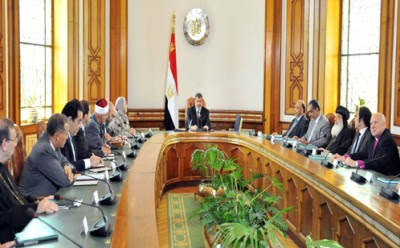 But of course, the church representatives are there for a different reason as well, namely because one of the plans, in an attempt at so-called soft diplomacy, is to send Egyptian church representatives to pressure the Ethiopians to do Egypt's bidding. The Coptic and Ethiopian churches have strong historical and spiritual bonds and this, of course, means that Ethiopia would relinquish its own national interests in order not to upset the Pope.. at least that's how Egyptian 'intelligentsia' see it. I will no longer comment on this for there is still so much to say.

Now, I admit I haven't watched the entire meeting, partly because of how perplexed I was. After all, this is the first 'secret meeting' I've heard of that got aired on live television. Oh, I forgot to mention, the organizer, one of the president's female advisers (Oh yes, FEMALE, look at how modern and open the Muslim Brotherhood is!) apparently forgot to mention to the guests that their words would be brought to the living rooms of millions of viewers. So there they sat, surrounded by enormous TV-camera's talking about their secret plots, unaware of the embarrassment they were bringing to themselves and others.

Only later on during the meeting, when someone literally said "I swear that all that is said here will remain secret" before sharing his own fool-proof plan, did it occur to the president's clearly highly capable female adviser to point out that the meeting was being televised.. live. But it's not a big deal really, everyone is allowed some mistakes, except that the Muslim Brotherhood administration has been making use of that allowance quite a lot ever since they came to power.

The second reason I didn't watch the entire meeting is a personal problem. In Egypt, when people are angry and frustrated, they like to express that in an animated way by pointing out how their blood is boiling or how their gallbladder is about to burst. Out of concern for my internal organs and general health, I couldn't watch the whole thing. However, what I did see was the incompetence and ignorance that has typified the Egyptian 'elite' for the past years.

I am not going to write down what was said during those meetings, I am sure international media will take care of that, indulging you with the ingenious plots our beloved public figures came up with. There are just a few points I'd like to highlight.

Dear Egypt, you are not the smart kid in class. You see, Egyptians* have the tendency to see themselves as the masters of the universe, the Egyptian child is the smartest child in the world and all Arab people should be thankful to Egypt because without us teaching them everything they know, they would have been left prey to ignorance and despair. Africans must just look to Egypt with silent admiration, hoping to learn something from this great nation.

The funny thing is that one of the attendees pointed out that Egyptians do tend to look down on Africans and that this should be remedied. His suggestion was that a group of Egyptians should go to Ethiopia and ask them, in what undoubtedly would be a very humble tone, "What can we do for you?"

Instead of arrogantly asking about what you can do for those 'poor, underdeveloped countries' (as opposed to yourself, a country with a booming economy), dear Egypt, how about you do yourself a favor and spit out the 'elite' which has caused you nothing but embarrassment? Dismissing those who have been consistent only in being wrong while being oblivious to the amount of damage they caused with their faulty political analysis, is the first step to recovery. A humble realization of our strengths, but mostly also our weaknesses, is the way forward for our arrogance and our delusions have served us little. So instead of asking what you can teach others, dear Egypt, teach your own elite a lesson!

*Please spare me any mention of how I am generalizing. Yes, I should hope my readers realize that I wasn't speaking about every single one of Egypt's 90 something million people.
Follow @SaraLabib Tweet Email ThisBlogThis!Share to TwitterShare to Facebook
Posted by Sara Labib