When I buried my friend.

I wanted to write this for those who cared deeply about Bassem Sabry and couldn't be there yesterday as he was taken to his final resting place; and there are many, Bassem's friends are everywhere in the world. It is also intended as part of  a small effort to honor him, to use just this little incidence which took place even after he died to tell people about him and to make the world realize the extent of the loss it suffered because of his passing. 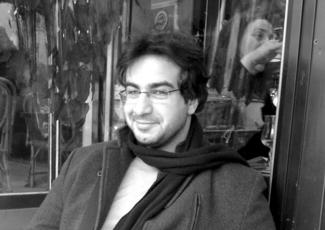 Bassem's funeral was set to take place after Dhuhr prayer (just before noon) on Wednesday 30th of April, the day after he passed away. People gathered at the Mostafa Mahmoud mosque in Mohandesseen, where Bassem lived, in order to pay their last respects. They stood in the Cairo heat awaiting the body to arrive, but it didn't. Soon it was revealed that the burial permit wouldn't be given out until an autopsy was performed. We weren't sure about the extent of the delay, so we went to sit at a place nearby the mosque, each holding on to the phone and trying to find out more news. As the hours progressed, news was spread that the funeral wouldn't take place on that day after all, but would have to be postponed since the paperwork was still not in order. And so people waited and waited, with red eyes from the lack of sleep and the many tears shed over their dear friend. Eventually, it was revealed that the body would be taken straight to the outskirts of Cairo, in the 6th of October district, where the prayer would be held at a small mosque at the graveyard. This was in the afternoon, at around 4 p.m.

So people rushed into their cars and made the long journey out of Mohandesseen at rush hour in order to get to the funeral spot on time. We waited at a place nearby the cemetery for the car carrying Bassem to arrive in order to follow it to the mosque. As the ambulance carrying him came closer, the cars starting moving. In a spectacle I had never seen before, the cars which were part of the funeral procession, carrying Bassem's friends and loved ones, started moving, all with their flashers on. They took up the entire highway and formed long lines, all headed to the cemetery as the sun was setting. It needs to be noted that it is very exceptional for burials in Egypt to take place after sunset. Yet all these people, in droves of cars, who had originally planned for a funeral at noon in the central Mohandesseen district, ended up on the outskirts of Cairo at around 6 p.m., headed to the cemetery where they would lay their friend to rest.

After the funeral prayer was conducted, he was carried by his friends to the tomb. It was a solemn scene, his loved ones standing as he was being put to rest, some silently contemplating, deep in thought, while others mumbled prayers and goodbyes, all with tears running down their faces.

So many people stood there as the sky was getting darker and the stars started appearing and Bassem was placed in his final resting place. So many people loved him dearly and wanted to pay their respects, perhaps say their goodbyes, try to get a sense of what had just happened, to realize the loss that had befallen them. So many people who had experienced Bassem's goodness and kindness, so many people whose lives were touched by him in different ways. And these were only those who were able to attend, there are many more who were there in spirit and in thought.

To bury a friend who went so early and so suddenly is the hardest, most painful thing. But as I was standing there, watching him being put down, agonizing over the immeasurable loss, I remembered him telling me that it was worth it, love is worth it. It is worth risking having to feel such pain at some point. It was worth it, Bassem, knowing you and loving you was worth it.
Follow @SaraLabib Tweet Email ThisBlogThis!Share to TwitterShare to Facebook
Posted by Sara Labib 1 comments

Between criticism and patriotism: Egypt, a proud and broken country.

One of the worst things the Mubarak regime did was to instill the notion that any public criticism of Egypt or shaming of its authorities is tantamount to expressing a hatred for the country, or worse, committing actual treason. Those who spoke out about institutional and societal problems in Egypt, were accused of “trying to ruin the country’s reputation”, an accusation that is commonly heard in countries without a democratic culture and with a record of abuses of individual rights. This problem was especially visible whenever a member of the Coptic community, a Christian minority making up about 10% of the country’s population, spoke about both state-encouraged and societally approved discrimination and sectarianism. The reaction consisted of two layers: one is the denial that such discrimination took place, the other was to claim that even if such discrimination took place, one shouldn’t highlight it or speak about it too loudly, certainly not in English. Egypt is made up of desert for the most part, so there is no shortage of sand for one to burry one’s head in and unlike other resources in the country, that one was used very efficiently.

After the revolution, this excessive concern with the “country’s reputation” skyrocketed as the can of worms, formerly hidden under years of Mubarakian dusty stability and security, was finally opened for all to see. However, one major difference was that the accusations of treason, condescension and hatred for the country didn’t just come from a fearful and fragile regime desperately trying to hold on to its image, but from many normal Egyptians who seem to have internalized that mode of thinking over the years.

Now, it must be said that many are indeed guilty of a rhetoric marred by an arrogant superiority complex and a condescending attitude toward Egyptians and their needs. Such a rhetoric was adopted equally by those who claimed revolutionary status and those who had hopes of holding on to the old order, by Islamists and secularists alike. Not only should this rhetoric be condemned for being distasteful and morally repugnant, it has also proven ineffective for, as it turns out, calling people “slaves” doesn’t usually get them to sympathize with your cause.

However, the harsh criticism I am talking about is of a completely different nature, it is not inspired by arrogance but by truthful self-reflection, not driven by contempt for the people, but an honest will to overcome the many challenges the country faces. If we believe true change comes from within society, we must be ready to face our demons. Empty slogans about love for and pride of a country with as many serious and deadly problems as Egypt are not only meaningless, but actually crippling to any progress.

When the host of the political-satire show Al Bernameg, Bassem Youssef, first started, he said Egyptians were known for their sense of humor, however, not when the joke was at their own expense. In fact, Egyptians do laugh at their own misery and make jokes at their own expense quite often, especially in those last years. It is only when that talk gets serious, when the people are confronted with the magnitude of the lies they have been fed since childhood by society and through state propaganda, when they realize the number of myths about greatness and superiority they have been told, that they take offence. The natural response then becomes denial and suppression of what has to be said. That reaction must change, for true good will for this country consists of placing its progress above its reputation, placing reason above myths and putting truth above all else.
Follow @SaraLabib Tweet Email ThisBlogThis!Share to TwitterShare to Facebook
Posted by Sara Labib 1 comments