Recently, the American administration decided it wouldn’t give Samira Ibrahim the “Woman of Courage” award she was supposed to get. The reason for the change of heart was a series of tweets which demonstrated hatred, intolerance and dangerously ignorant thinking. This has caused much controversy and stirred up a lot of debate that deserves some analysis.

Samira appeared in the spotlights last year when she claimed she had been subjected to so-called “Virginity Tests” by the army. In a society where victims of sexual harassment are often blamed for the abuse they had to endure, it takes a lot of nerve to stand up and admit one has been the victim of such harassment. Furthermore, Samira’s case wasn’t just against anybody, it was against the institution which was then still in charge of the country. With over 100.000 Twitter followers, Samira is now a public figure whose case drew a lot of media attention both domestically and internationally. 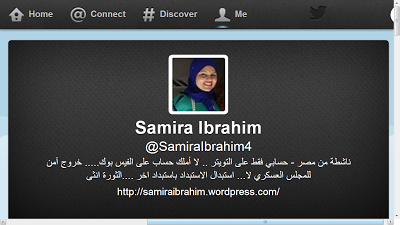 In her tweets, Samira had wished for America to burn and this on the anniversary of 9/11. Furthermore, she expressed her joy at a terrorist attack which killed several (Israeli – does that matter?) civilians in Bulgaria. She also positively quoted Hitler as saying that the Jews are behind all the world’s problems. With regards to the anti-Islam film which has caused a lot of anger when it appeared last year, she said that the diaspora Copts are not the only ones to blame, but the entire West.

My aim is to discuss the responses to Samira’s tweets and the reactions they got. According to some, Samira was wrong in saying what she said, but shouldn’t have been deprived of the award regardless of that fact. In their view, the award was supposed to be for her courage in her ordeal with the army and shouldn’t be dependent on views she expressed in public. Ironically, Samira’s first reaction after people became aware of her tweets was to claim that her account had been hacked and that all racist or hateful tweets weren’t hers. Courage, as apparently some don’t know, is also about taking responsibility for one’s opinions and admitting the mistakes one makes. When it was clear she wouldn’t be getting any award, Samira made the claim that she had been pressured to apologize to the Zionist lobby for her tweets, claiming the Zionist lobby was the only problem. According to that theory, the U.S. would have gladly and readily rewarded a woman who wished for them to burn if only the “Zionist Lobby” hadn’t intervened.

The next important response is the one in which it is claimed that her statements should be put in context. The argument goes that since many Arabs use that kind of rhetoric, what Samira did “isn’t really that bad”. This reasoning is flawed on many levels. Firstly, there is the assumption that this kind of anti-Western, anti-Jewish, anti-Coptic rhetoric is a natural thing to Arabs and therefore excusable in some way. It’s as if the proponents of this view believe that "Arabs just can’t help it". Needless to say, those who adhere to this idea insult Arab individuals in a very profound way. Secondly, the pseudo-logic of justifying a mistake “because someone else did it” might be expected of children aged 5-7, but surely not of anyone who wishes to be taken seriously in a grown-up world.

Finally, some people rushed to the defence of Samira Ibrahim claiming she is a poor, uneducated girl who simply didn’t know better. Apparently, one needs to go to Harvard to learn that reveling in the death of innocent civilians is wrong. Also clear from this reasoning is the very nasty habit which many (mostly leftist) pundits have adopted in which poverty is used to justify unacceptable behaviour. Again, in the assumption that “poor people just can’t help being bigoted, intolerant and inhumane individuals”. Surprisingly (well, not really) those who claim to defend the interests of the poor by speaking on their behalf, are insulting them in a very paternalistic way.

The fact of the matter is that what Samira Ibrahim did was wrong. And it was possibly even worse to deny it and then claim hero-status for having supposedly resisted immense pressure from the Zionist lobby (nota bene: the tweets mentioned above weren't about Israel or Zionism at all). Thankfully many activists loudly denounced what she did, but there remains a large portion which believes defending such behavior can somehow be beneficial. The reality is that it will only perpetuate the problem. We need harsh self-criticism and strong principles in the realization that we won’t move forward unless we start taking responsibility and demanding that others bear the consequences of their actions as well.