It is time analysts and commentators lay off and stop criticizing Arabs for not being 'democratic', 'liberal' or 'human rightsy' enough. The truth of the matter is that Arabs aren't made for the whole democracy thing nor do they care for so-called human rights. In fact, polls suggest that dictatorship comes natural to Arabs and runs in their veins together with the unnaturally high amounts of tea they consume while sitting outside in the afternoons discussing Arab-stuff.

It is also time we are honest about those, from the West or from within the Arab world itself, who engage in public condemnation of actions committed by Arab rulers to protect society from foreign influences. These people are either paid agents or self-loathing Arabs who don't understand or appreciate their culture. 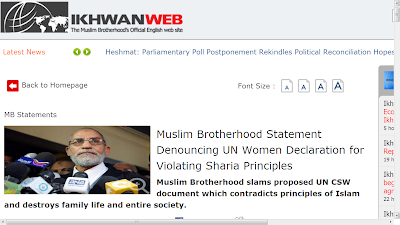 Let's discuss the case of the statement issued by the Muslim Brotherhood regarding the discussions recently held in the UN Commission on the Status of Women. The Muslim Brotherhood, being the only true representatives of the Arab people, as polls suggest, epitomize universally held values in the Arab world. Their rejection of the possibility of marital rape is but a reflection of what Arab and Muslim identity really stand for. We must trust that this is only in the interest of protecting society from "complete disintegration" as they say in their statement.

As the wise Protagoras said back in the 5th century BC (that is before all Western analysts became hell bent on destroying Arab identity) "Everything is relative". We must remember that like freedom of speech and freedom of religion, the right to physical integrity is also a mere Western construct that is not necessarily fit for Arab consumption. When the Muslim Brotherhood sees it fit to legalize FGM (female genital mutilation) or allow child marriages, it is an act of courageous rebellion against Western intervention. Things like police torture and trials of consciousness for atheists are absolutely normal in an Arab context, even if they're frowned upon elsewhere.

To the Western reader, I say, you must understand that democracy and Arabs don't mix. It is an achievement already that they were able to resort to the ballots, requiring them to fulfill the other complex requirements of a fair democratic process is asking too much. Arabs love dictators and hate democracy and this is why they are restoring dictatorships after they fell during the Arab Spring revolts. It was wrong to condemn the rulers then as it is wrong to condemn them now for simply trying to protect their societies. If the so-called human rights of individuals have to be sacrificed for the sake of the collective, then that is their prerogative.

And to those Arabs who advocate for human rights, I say that they must review their position. They must realize that they are tools in the hands of those who want "the intellectual and cultural invasion of Muslim countries, eliminating the moral specificity that helps preserve cohesion of Islamic societies" as the Muslim Brotherhood warns.

Disclaimer: Just in case it wasn't clear: this is a parody of moral relativists and their dangerous views on the Arab world.
Follow @SaraLabib Tweet Email ThisBlogThis!Share to TwitterShare to Facebook
Posted by Sara Labib