It is truly mind boggling when, after a drive-by attack on a church which left 4 dead and 17 injured, the first questions to come to the minds of many are "Why wasn't the church secured enough?" or "Where was the police?". Let me first clarify that it stands beyond a doubt that there is blatant lack of law enforcement in the country, whether in sectarian incidents or otherwise. However, it stands to reason that the question "Why do churches require special security in the first place?" should always remain on the foreground.

With the spread and popularity of conspiracy theories claiming sectarian attacks such as this one and, most famously, the 2010 Qedesseen church bombing on new year's eve in Alexandria, are committed by government forces, there is little room left for reasoned debate. Even though claims of state involvement in committing these acts have never been proven, they are often used to mask the very bleak reality of sectarianism in Egypt. This is not a defense of a state which has historically engaged in discriminatory practices and failed to fulfill its basic duty of protecting the life, freedom and property of its citizens. Even before the security situation deteriorated and chaos reigned, the government always cared more about denying the existence of sectarianism in Egypt than prosecuting and punishing the perpetrators of sectarian crimes.

However, criticism of government incompetence and failure should never overshadow condemnation of those who threaten, incite and perpetrate such acts of violence. The people in government are but a part of a society ill with sectarianism and they tend to reflect trends shared by large proportions of the population. The latter basks in sectarian thought despite its continued insistence on the illusive "national unity". The Coptic problem is one where both state and society share in the responsibility and sectarianism has become much more widespread than many assume.

Copts needing extra protection has become the norm because the idea of citizenship in Egypt has become the exception. Instead of requiring the government to rectify a system through which Copts and other minorities are de jure and de facto second class citizens, many simply demand the amelioration of that inferior status. Copts are viewed by many citizens as the weaker, younger sibling who needs protection. In turn, many Copts view themselves not as individuals, equal to other Egyptians, but as a distinctly different nation which, as a collective, should have certain rights. Lost in between nationalism (Islamist or other), collectivism and tyrannical majorities are the concepts of individual rights and individual responsibility.

With the new constitution currently being prepared, Egyptians need to reconsider how they view each other and how they translate the concept of citizenship. Do Copts remain a marginalized minority, a collective which needs special protection? Or are they citizens whose lives and property are worth protecting simply because they are citizens of this country? When someone explicitly incites the usage of violence against Copts, will he be viewed as a criminal and treated as such or will it require a balancing act between religious feelings, tribal sentiments and justice? Will rights and freedoms remain things to be compromised on by different interest groups or will they be regarded as undeniable and inalienable to each individual citizen?

We know what the answer will be in the near future, but without a fundamental change in the relationship between Copts as part of society at large and the state, the problems will sadly persist. Egypt needs an understanding of individual rights which makes people attending their religious rites in peace and security the norm, instead of the exception.
Follow @SaraLabib Tweet Email ThisBlogThis!Share to TwitterShare to Facebook
Posted by Sara Labib 0 comments

Walking through what used to be the most elegant and beautiful neighborhoods of the city, I try to imagine how they must have looked like in the 40's and 50's: expensive shops with the best fashion has to offer, gold stores, shoe shops with beautiful leather creations. Along the clean sidewalks, women in dresses would be walking along with men in suits and shined shoes. Instead of cat calls and obnoxiously disturbing, loud music thumping from stereo's and cellphones, you'd hear people's conversations in Arabic, Greek, French and Italian as you pass the occasional coffee shop playing Oum Kalthoum. Newly build villa's standing as proud tributes to the architects who built them, lush trees and flower gardens separating one from the other. 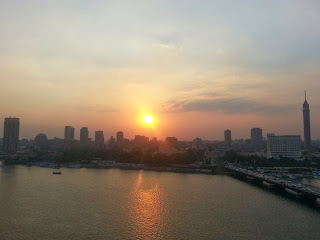 And I imagine the slow decay both in society and its outward manifestations, more and more ugly cement Nasser-era buildings. Shops and factories formerly owned by Egypt's large expatriate community nationalized as their owners left the country they had grown to love. One at a time, the beautiful villa's would be left to fall apart, until in the 80's and 90's their owners would demolish them to build high apartment blocks. Streets not designed for all the inhabitants of the newly built blocks of concrete would become overcrowded as street vendors would occupy the side walks.

As the country lost battle after battle, failing to reach modernity, the city would slowly suffocate from the inside. Millions would come from the country side, leaving behind their lands for dreams of a better life as government employees in the capital. Slums would become the burying ground for their hopes and some eventually moved into the city's cemeteries where they would share their life with the dead.

The weight of war, defeat and arrogance would take its toll on the people and society would soon reflect the decay the old villa's and luxurious department stores had faced. Extreme Islamism and terrorism would show its ugly face in the 90's and the sick ideas behind it would soon spread to all corners of the land.

Under the crushing weight of the state bureaucracy, the suffocating, ever present pollution in the streets and in the minds of the people and the corruption, Cairo breathes heavily. As you walk its streets, finally reaching the corniche where the ancient Nile runs through the city, you catch a glimpse of what used to be and what could be and you sigh, along with Cairo, under the burning sun.
Follow @SaraLabib Tweet Email ThisBlogThis!Share to TwitterShare to Facebook
Posted by Sara Labib 0 comments